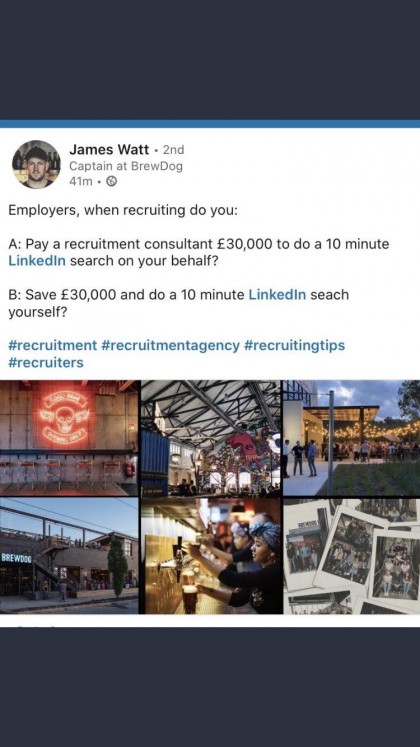 SOMEONE WELL-KNOWN TAKES THE PISS OUT OF THE RECRUITMENT INDUSTRY

This “well-known someone” posted the above comment on LinkedIn (since removed for some reason) that could probably best be described as apocryphal and who happened to work at a company that’s been hugely successful in recent years and recognised as having some interesting product marketing.

Some seemed to take his post literally. That he really could find a candidate for a job paying somewhere between £100-150K in 10 minutes.

Or that having a quick look on LinkedIn, seeing a potential candidate with the right credentials, sending him/her an Inmail, getting a positive response back that includes their CV and then forwarding that CV onto the hiring manager is pretty much all a recruiter does to earn a living. Apart from sending out an invoice for £30K every time one of them lands. Which by the way, is fucking never.

Some other people got angry. They seemed indignant that someone relatively high profile was making disparaging remarks about their industry.

Lots of other people, me included, have taken the piss out of the recruitment sector before – but they weren’t high-profile businesspeople, built a multi-million pound company, done some cool marketing and been on the telly. As a case in point, I’ve only done one of those 4 things.

But all those other piss-takers didn’t matter.

For some, this outrage quickly fermented (sorry…) into a threat that they’d never buy BrewDog beer again. Would recruiters not drinking their beer make a dent in their £200M turnover? Knowing BrewDog, they’d probably start a new marketing campaign promoting the fact that recruiters had boycotted their brand. And it would probably work.

The problem with all this outrage, at least as I see it, is that it stops recruiters seeing the real issue.

What James Watt, the MD at BrewDog was really saying is that he thinks recruiters deliver little value. Or that if they do, it’s overpriced.

What he wasn’t saying was that recruiters regularly generate big fees as a result of doing 10 minutes work.

But whatever way you look at it, it’s about perceived value.

Recruitment agencies talk a lot about value, but very few can articulate what it looks like exactly – at least not in terms that mean anything to the client. I know because I’ve asked, many times. It’s one of the reasons why all their websites look and sound the same. They all say they add value, but never say anything credible as to how.

Let me give you just one example. Even better, let’s use James Watt at BrewDog to illustrate that example.

Let’s imagine that a potential candidate for a £100-150K job opening gets two Inmail messages.

One from a director of a well-known company like BrewDog.

The other from a recruiter saying “We have an exciting job opportunity with a dynamic company that we think you’d be a good fit for”.

Which of those two messages do you think the potential candidate is going to take more seriously?

So, if we agree that James Watt sending job Inmails to people is going to get many more positive response than Terry at Acme Appointments who 2 years ago made a career transition towards recruitment and away from selling gym memberships, then we can start to see where his disdain for the industry comes from.

He’s saying that he too can use LinkedIn to find potential new employees and that he knows how to send Inmails. Chances are he’s better at marketing than most recruiters as well, so his Inmails are probably going to be more readable.

That is the difference in value perception. It’s a chasm.

If this particular MD thinks recruitment agencies add very little, then there’s a pretty good chance that directors at lots of less well-known companies are going to think the same. It doesn’t matter if recruiters don’t think it’s true.

So, why do so many hiring companies see such little value in the agency service?

There are probably several reasons, but for me, one of them is that the recruitment agencies who do deliver good service, do nothing in their marketing to tell companies what that looks like.

They all say the same thing in more or less the same way and it’s doing nothing to change people’s minds.

This is probably fundamental to why so many companies generally only see the value of recruitment agencies collectively, not individually.

Either way, I think both recruiters and hiring managers need to start understanding each other a little better. It shouldn’t be hard, because they both want the same thing.

Recruiters need to understand that the only two things they need to be good at are candidate attraction and candidate assessment if they’re ever going to have happy clients who regularly come back for more.

Admittedly, they’re two big things and will take some effort to get genuinely good at – but my point remains – if these two things are done well, jobs get filled without too many problems.

And that, fundamentally, is what all hiring companies want. They just want to know that they’re getting the best candidates because those candidates have been attracted and assessed well.

What is your reality?

The quickest way to start educating potential clients to your true worth is through your marketing.

It’s not hard to do either. You just have to be honest about what you’re good at, what you’re not so good at and work out which parts you think your clients need (or want) to know. Then you need to hire a creative to translate all that information into marketing materials that people will remember. Please don’t try and do that part yourself – at least not the first time.

Or you could take the even easier option and build a name for yourself by regularly putting out job ads that people want to read. At least then you’d be openly demonstrating that you’re good at something most hiring companies are bad at.

If both recruiters and hiring managers entered into more conversations armed with the same basic understanding of what needs to happen to fill a job, chances are a lot of the negative perceptions (and outcomes) could eventually be reversed.

By the way, the best time to have those conversations is when the hiring manager doesn’t have a live vacancy. It’s called ‘business development’. Apologies if that sounded sarcastic.

Then, when everyone has started talking to each other properly, maybe we can all stop doing stupid shit like boycotting a company’s products because an MD took the piss out of the industry we happen to work in.

So James Watt, the founder and MD of a successful British beer company, posted on LinkedIn that recruiters don’t do much to earn their money.

The real outrage here is that he can say it, not that he said it.

Good for Captain James Watt that he has the time to search for himself and the brand to attract high level candidates. (Then take the time to slag off a whole industry of headhunters and recruitment agencies.) I could also go the direct route when I was a CEO at Havas and IPG. But its a damn site more tricky when your ‘brand’ is relatively unknown and your LinkedIn search throws up hundreds of possibles. Its not laziness that stops others doing the same as the Captain. Its just a necessity for many companies to get help to attract the right people to their business.

Commenting is not available in this section entry.