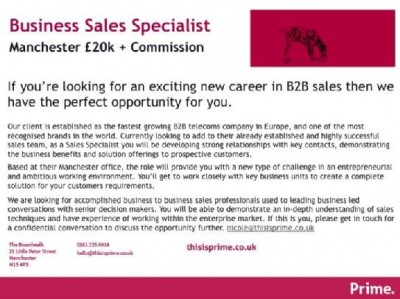 Above is a job advert for a salesperson.

I won’t beat about the bush; it’s not a very good advert, despite it trying quite hard to be a good advert.

It’s trying too hard with the packaging (it looks nice) and not hard enough with the content (it’s saying nothing).

The headlines are weak. £20K for a salesperson who “can lead business conversations with senior decision makers”? Are you sure about this? I’ve never met a salesperson earning that little, who’s that good. And I’ve been recruiting salespeople for what feels like 147 years.

Then there’s the promise of “a perfect opportunity for you”. A promise that ultimately goes undelivered.

Like all agency ad copy, it starts with the depressingly tedious ‘my client, a dynamic, very successful, blah, blah, blah…’. opening

It also uses a lot of words just to say ‘you’ll be selling something’. Thirty seven words to be precise.

The only potential interesting part of the advert is this:

But then nothing else.

No example of how this company is entrepreneurial, no insight into how the challenge is new and no proof of their ambition.

It’s just fluff. A series of clichés that were probably passed-down by generations of other recruiters – hopefully by osmosis rather than by formal training.

So why does it matter?

If you run ads similar to this one, you’ll possibly argue that those ads have been responsible for producing candidates that you’ve subsequently placed and that have helped keep you in business all these years.

But how many more placements would you have made if your advertising had done what advertising is supposed to do? How much happier might some of your clients be now? Not just because you produce job ads that sell, but also because you’ve been more consistent in finding them the right candidates?

So how do you evaluate a job advert before publishing it?

I think the best way is to read it again slowly whilst putting yourself in the shoes of one of your target candidates. One who doesn’t need to find another job.

What is in the advert above that would make this kind of person respond?

How many salespeople currently hitting target with a strong sales pipeline are going to be interested in a job ad like this?

Would it kill you to tell the candidates why this job might improve their lives?

Isn’t that one of the fundamental building blocks of selling?

If you reveal and sell the right things, you have a much greater chance of attracting more of the right type of candidates. I think this is unarguable. Yet in almost every agency recruitment advert I ever see, this basic fundamental is ignored.

In simple terms, there are two types of candidate.

Any kind of job advert will get the attention of the former. The real barometer of an ad’s effectiveness is how many applications it gets from the latter.

The bottom line is that the above job ad doesn’t actually say anything, least of all sell anything. It’s the type of job ad that some people would accuse of being fake, an amalgam or “representative” of a number of jobs that the agency are trying to fill.

It’s one big anachronistic example of why many agencies suffer reputationally from a perceived lack of transparency, knowledge or insight – in a connected world that increasingly is starting to expect those things as a minimum.

Needy people will apply for almost anything because need is a negative motivator and want a positive motivator. Some needy candidates will be very capable future employees – if they’re assessed properly.

They need to be assessed properly because (and this bit is important), they’re often quite good at subconsciously processing this neediness into enthusiasm.

Recruiters and hiring managers often mistake this enthusiasm for taking the job as being the same thing as being motivated whilst doing it.

Are your job ads appealing to people who need a job or people who want a better job?